How many of you have heard of this concept? I am reading How to Blog a Book  by Nina Amir. It’s good so far, and interesting. But so far it seems to me like it’s basically like when I used to post fanfiction. Yes, I got sucked into that fan-driven whirlwind back around 2002. My account is still currently active on one of the biggest fan fiction websites. I haven’t decided if I want to remove it yet or not.

Blogging a book, as far as I can tell, is a great way to get people interested in your book. That’s how it is with fan fiction, too. Get readers hooked on your story, and watch them flock to it. And they sometimes leave reviews, too – although, depending on how you’re handling those fave characters, it might not be a favorable one. Still, it’s great interaction with the fans. So how much greater would it be if they were fans of your original work?

That all being said, it’s a big project to post a story online, and to update it in a timely manner. I am currently rewriting the first story in my YA fantasy series, and have thought about blogging it. I have enough written that I could update once a week or even twice a week for a while, and see how it does. Meanwhile, I’m editing the first book in The Flying Ponies series, Lift.  Lots to do, and I have to wonder if blogging the first fantasy novel would be worth it.

What do you think? Would you be willing to blog one of your books-in-progress? It could be an adventure!

Have you ever spent a lot of time plotting out a story, complete with a timeline and outline, only to have your characters hijack it? This happened with the first story in my YA fantasy series, set in my world of Pentallia. I spent months outlining, drawing up character sheets, and writing out scenes in a concise timeline, only to have my three main characters take my work and pitch in the garbage.

That first story was written in first person POV, and frankly, it didn’t work, for me, the characters, or the first publisher I sent it to. I’m currently rewriting it, in third person, and without an outline. My characters don’t respect those. I’m also planning to go the indie author route, with help from Wicked Whale Publishing.

But back to those characters who laughed at my huge binder of work. I still have it, but broke it down into multiple smaller notebooks and four Pinterest boards specific to their world. I refer to those things when my characters, my people, take me somewhere in their world I’m not quite familiar with. For the most part, I just try to keep up.

And you know what? Something amazing has happened along the way: my people actually know what they’re doing. This second version is so much better than the first. I have discovered I am not a first person POV writer. I have also realized that by letting my people go free to roam, they have it all worked out. Now that doesn’t mean it won’t need editing – it will. But it does mean that the story is much clearer, and the flow is right.

So where does this leave you? Do you have a huge binder filled with outlines and timelines your people won’t cooperate with? Why not try writing a chapter without referring to the binder (or notebook or Scrivener or whatever) and letting your characters do what they want? They might disappoint you. They might anger you. But, and this is why you should try it, they might surprise you. Mine did. They may wander on occasion, and I have to help them back to the task, but they seem to be getting it right.

Maybe yours will, too. 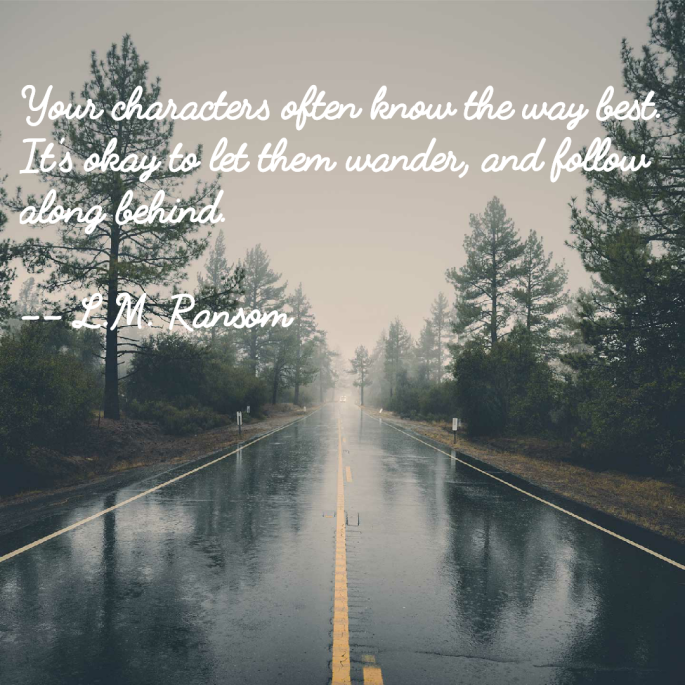 I’m sure most of my fellow writers have heard of Scrivener, and probably quite a few of you use it. I had read about it in some of my self-publishing books, but decided to give it a try only after a fellow writer I admire told me how much she liked it. I thought that if I liked it too, I could add it to the author toolbox that Stephen King encourages us to build.

I am using the free trial, and all the reviews on the software are right: there is a pretty hefty learning curve. But after using it today with my fantasy series, I must say I am a fan. I absolutely love the corkboard feature. I’m looking forward to using the name generator as well, when the time comes for that. Once you get the hang of it, the software is pretty easy to use.

I still like Word for working up chapters; in Scrivener instead of scenes, I’m using chapters as well. I like that Scrivener keeps everything for a story together; I might not have to utilize so many notebooks just for one story. Being able to have all your notes in one “binder” is also helpful, as my fantasy world of Pentallia is sprawling, with lots of people and places.

If you’ve thought about trying Scrivener, but been on the fence, I encourage you to at least try the free thirty day trial. You might find it worth adding to your author toolbox, too.